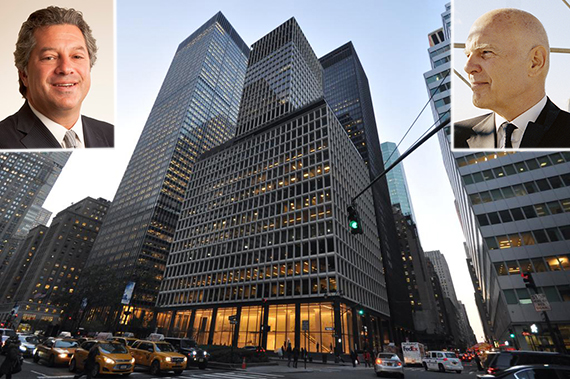 *280 Park Avenue in Midtown (inset, from left: March Holliday and Steven Roth)*
Despite reports suggesting that Manhattan office asking rents are at all-time highs, it appears office landlords in Midtown are losing the power to set rents on their properties – even in the market’s most prized corridors.

Office tenants at “top-quality” Midtown locations paid 7.4 percent less in February than they did at the end of last year, according to real estate research firm Compstak, with last month’s softening coming after a 13.3 percent increase over all of 2015.

The trend is the result of landlords like SL Green Realty, the city’s largest in the office market, having lowered asking rents in some of their most desirable buildings, according to Bloomberg. Others, like Scott Rechler’s RXR Realty, are keeping rents steady.

There has been a sense in recent months that some air has been let out of the Manhattan office bubble, despite both asking rents and leasing activity reportedly at healthy levels. The likes of SL Green CEO Marc Holliday, for instance, have raised the possibility of a downtick in job creation in the city potentially affecting its office market.

CompStak’s data notes that Midtown’s average taking rent – what tenants agreed to pay after landlord conessions like free-rent periods and space upgrade allowances — fell to just over $78 per square foot in February, compared to more than $84 per square foot at the end of last year.

Meanwhile, SL Green and Vornado Realty Trust recently lowered asking rents more than 10 percent – to $95 per square foot from $99 previously — for space in the middle floors of [280 Park Avenue](280 Park Avenue), the 43-story Midtown office tower they co-own. The landlords also chopped asking rents for spaces in the building’s lower and upper levels.

Published on Mar 16. “Transparency increases the accountability of commercial real estate professionals to their clients,” says CEO and…

By Bloomberg News on March 11, 2016. Midtown Manhattan office landlords are losing some power to set rents on…