A US firm has launched a new crowd-sourced database that gives agents and investors "hard to access" details of UK commercial property deals. 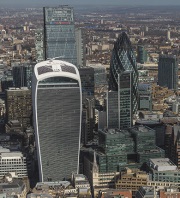 CompStak, which launched in the UK yesterday, already lists the full details of more than 10,000 lettings deals in London.

Agents, researchers, and valuers can access the database for free if they contribute to it by uploading packages of information about leasing deals they have worked on.

Co-founder Michael Mandel said: “You earn credits when you provide these records, and [they] work as a virtual currency that you can use to get [more records] back out of the system.”

The records include the landlord name, the tenant name, the agreed rent and the rent increases over time, the square footage, the agents on either side of the deal, and details of any rent-free period.

The database works on a “roughly one for one” trade rate, he said.

Central London office deals
The company has operated in the US for the last four years, and amassed a database of more than 330,000 commercial leases.

The UK database – initially compiled by “early adopters” including seven of the largest brokerage firms in London – mainly lists office deals in central London. However, it also contains details of West End deals, and a few thousand from outside the city, Mandel said.

Customers search the database through the CompStak website to find deals they are interested in, and can see limited information before they spend their credits.

“We give you the address, the tenant name, the transaction quarter, the space type, the size of the deal, and the lease type,” Mandel said. The service allows agents to get information that they’d normally “trade informally” with other agents.

“We’re the only database where you can search and find the specifics of these deals. I don’t know of anything else that exists that does this,” he continued.

Subscription fee for investors
Agents and researchers are Compstak’s main customers, but investors and lenders can also access the database if they pay a subscription fee.

This fee varies, but CompStak’s US customers – which include Blackstone and Brookfield Property Partners – have signed deals from “low five figures [up] to seven figures,” according to Mandel.

UK customers can expect fees at the lower end of this range to begin, with prices rising as the database grows. The company hopes to expand its database to deals in the rest of the UK after testing its success in London.