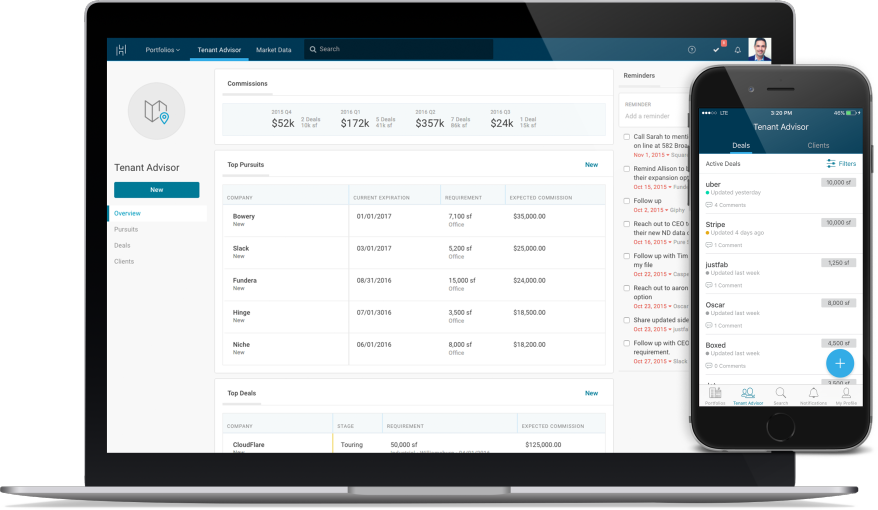 Finding details about commercial leases is going to get a whole lot easier for landlords and brokers.

Through Hightower’s platform, landlords, building managers and tenant rep brokers keep track of property and client data, including information on vacancies, deals pending, asking rents, contacts and analyses. Hightower’s leasing management software supports retail, office and industrial leasing. And within the next few months users of the product will be able to view up-to-date market leasing transactions from CompStak on Hightower’s platform.

Customers “want to be able to in real-time compare and track how their buildings are performing versus their competitive set, which they will now be able to do in Hightower,” Brandon Weber</a href>, a co-founder and the chief executive officer of Hightower, told CO. “They want to compare any deal they are about to do with the market in real-time. So they don’t have to go hunting around for [market information]. This is pretty transformative, because it’s bringing market intelligence and market analytics directly into their day-to-day workflow platform for managing leasing.”

Hightower, a three-year-old company with 80 staffers in seven offices around the globe, boasts more than 125 institutional landlords worldwide, including heavyweights like Vornado Realty Trust</a href>, Two Trees Management Company</a href> and Rudin Management Company</a href>. There are 3,000 individual brokers using the platform as well, from major brokerages such as CBRE</a href>, Cushman & Wakefield</a href> and Colliers International</a href>. The landlord rep platform costs $99 per month</a href> and the owner software is priced per square foot and depending on type of real estate asset, as CO previously reported.

Data from Hightower’s platform will not be available via CompStak, which was founded in 2011, as a result of the partnership. Mr. Weber declined to provide the terms of the deal. The firms are among real estate tech companies raising significant venture capital. Hightower has raised $21.7 million through four financing rounds and CompStak has hauled in about $14.4 million in five rounds, according to CrunchBase. In May 2015, Hightower received $13 million</a href> in venture capital, as CO reported. (Thrive Capital</a href> is an investor in Hightower; Thrive is run by <a href=https://commercialobserver.com/tag/josh-kushner/">Josh Kushner</a href>, the brother of CO’s publisher, Jared Kushner.)

“As we’ve gotten to know Hightower, we’ve seen how critical the leasing management platform is to the daily workflow of leasing teams and asset managers,” Michael Mandel, the CEO of CompStak, said in a prepared statement. “Leasing management and real-time market data go hand-in-hand. It’s truly a win-win.”

Published on April 21, 2016. Users of VTS’ and Hightower’s commercial leasing management platforms will now able to…

The Real Deal: Average effective Manhattan office rents grew 3% in Q1, but there are signs of wariness

By Rey Mashayekhi on April 19, 2016. Despite waning optimism in some sectors of the Manhattan commercial real estate…